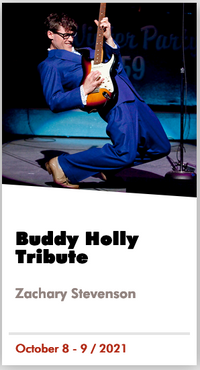 Zachary Stevenson is an award-winning actor, musician, and writer. Originally from Vancouver Island, Canada, Zachary has been coined a “dead ringer for dead singers” by the Victoria Times Colonist for his portrayals of Buddy Holly, Hank Williams, Phil Ochs and roles based on Elvis and Jerry Lee Lewis. In 2018, Zachary won the Jeff Award in Chicago for Outstanding Performance by an Actor in a Leading Role (Musical) for the Buddy Holly Story, a role he’s perfected in more than a dozen productions across Canada and the United States. Coming back after two sold out shows in 2019, Zachary Stevenson is ready to “Rave On” once again at the Belfry!